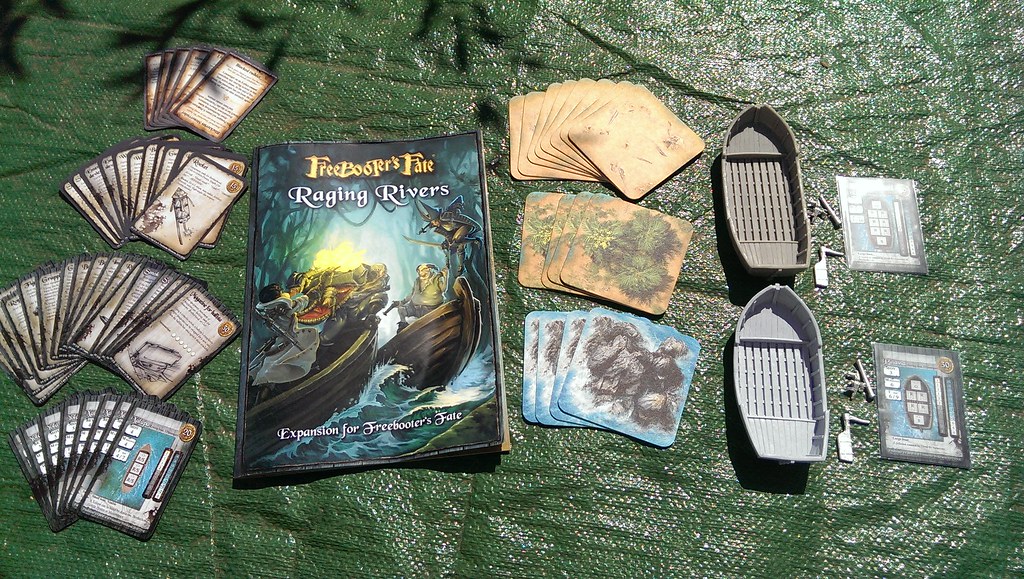 So, the Rulebook is 32 pages long in traditional Freebooter colour and it contains some background story, some new scenarios and the rules for including boats in your games of Freebooters' Fate.

The boats range from 3 seater canoes to 8 seater rowing boats. The rules cover everything from getting into and out of boats, where to sit and the actions a boat crew can take (rowing, steering, firing ordnance (new weapons)) to boarding,ramming and running over swimmers.

Actions follow the basic principle as that of characters, with the people on board a boat deciding whether to give their actions to the boat or activate separately. For example in a Barkassa (8 seater) 6 rowers can contribute both actions to rowing, the character at the tiller can steer twice, the gunner at the bow can fire the boat weapon, or 2 of the rowers could decide not to row, but to aim and fire at enemy figures with their own weapons. In the latter case the boat wouldn't move as far, but would be more deadly to the enemy.

There are a few changes to the rules for some characters in order to ensure balance (bombs would have been devastating to a boat).

The new card deck contains 8 boat cards (3 seater canoes and 3 seater rowing boats), new personal equipment to help your characters out when there are boats around, new boat equipment and new weapons for boats (swivel guns, boat mortars and ballistae). There are also 6 new Event cards for those unlucky enough to keep finding the 1s in the Fate Deck.

The boats in the picture are the 8 seater Barkassa and the 6 seater Pinassa. Certain boats and the weapons for them are only available to certain crews.
Letzte Änderung: 19 Apr 2016 01:21 von Thargor.
Folgende Benutzer bedankten sich: Eorl, SicRat, Bratspies, Volker, Highn, StummerWaechter

Weniger Mehr
19 Apr 2016 12:04 #21519 von Trinni
Trinni antwortete auf Salute 2016 - 16 April - London Excel
Thank you to everybody coming by for making Salute 2016 a wonderful show for us! For those who couldn't attend, we have shot photographs of the stand and demo tables before she show started. Although a bit fuzzy, the photograph of Morkin shows the enthusiasm and fun we had throughout the whole show - although Trinni and Sven definetely have to work on showing that on pictures.

I'm still waiting for a review, some photos, anything, but there is almost nothing.