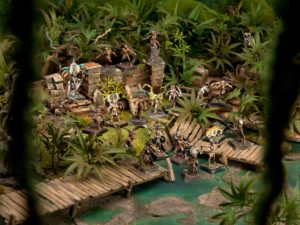 As an added bonus, Amazons are allowed to swap one piece of terrain on the battlefield for a forest before the game begins.

The Amazons are a loose confederation of tribes who showed up on Leonera about a decade ago. They followed some ancient knotted charts to land on Leonera with the aim of finding out what it is on this island that hems the flow of energies to the Great Earth Mother. It is of course only a vicious rumour that a few powerful shamans back home, knowing full well that the Great Earth Mother doesn’t actually exist, used this as a ploy to get rid of some uncomfortably ambitious tribal leaders by making them travel to the far side of the Great Water. A vicious, completely unfounded rumour.

It took a while for the rest of the island to notice that there were now Amazons ranging through the jungles of the hinterland. You did occasionally see a few feathers moving at the fringe of the jungle, but that could have just been very big birds. But then more and more young men from the suburbs vanished in the jungle overnight, only to reappear the next morning with faces just wide enough for their grins. After some time, the number of babies left on doorsteps rose sharply – all of them male. Coincidence? Um… maybe? But when the wives and girlfriends of domestically violent men began to seek refuge in the jungle only to reappear among bands of heavily-armed female warriors some months later, it was certain. The Amazons were here!

The Amazons mainly stick to the jungle where they look for the sacred sites of their ancestors with the aim of cleansing them spiritually. Their link to the trees is so close that many of them can move faster and see farther through the jungle than other human beings. So if an arquebusier of the Armada smirks patronisingly at the Amazons’ bows and blowpipes, they will soon change their mind when they are being shot at by somebody they cannot see and who doesn’t seem to have to do much in order to reload.

The Amazon’s communion with nature is so strong that they somehow always manage to have a piece of forest around whenever they are fighting. And that’s not all the support they get from nature. There are also the Oncas: large, people-eating cats who obey the Amazons’ every command.

Amazons do not hold with too much clothing to the point where they call non-Amazons “clothskins”. This does not stop them from festooning themselves with feathers, torques, bracers, bracelets, and the signs of their specific tribe’s totem. You can always tell to which tribe a fully initiated huntress or warrior belongs, whether by a crocodile mask, a monkey tail, or the raptorial claws of a mantis.

On the battlefield, the Amazons have to make sure to play to their strengths: set up lines of fire through terrain which only they can see through, use their high rate of fire which black powder weapons just cannot keep up with, and run away, sorry: stage tactical withdrawals through the types of terrain where others can only follow with difficulty. They should stay clear of prolonged melees, those are not their forte. Although the warriors of the gorilla tribe have a different opinion on that.

Want to fight for the Matriarchy? Then welcome to the jungle!