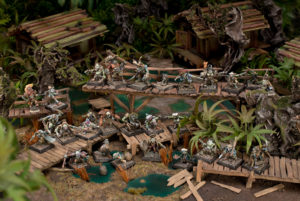 Nobody really took them seriously when they were all just small, green, and harmless. Humans kept them as slaves, smirking at the goblins’ ability to not have a gender until it was required or they found one they liked. But then some goblins found an orc who taught them how to fight. It did not take long for goblinkind to rise up and throw off the yoke of slavery.

The rest of the imperial world is taking them very seriously now. They even managed to conquer a sizeable part of Longfall, naming it Goblinopolis. They have become a serious player in the structure of power on Leonera, especially since a benevolent fate gave them two more orcs.

Goblins are usually found in large groups. It is their way of compensating for the fact that individually they are weaker and less brave than the average human. But their strength does not just lie in their numbers. Their frequently exotic weaponry and equipment make them somewhat unpredictable for their opponents. They are very inventive when it comes to blowing things up. Well, things or opponents. The combination of superior numbers and creative “miracle weapons” is more than enough to offset the individual goblin’s shortcomings. Their stuff may not always be the most reliable, but it is frequently the most entertaining. Anybody who likes their fate to surprise them should get themselves a horde of goblins and see what happens.

Goblins are cowardly and usually a tad weak in the arm – which explains the high ratio of peglegs in the crew – but they take heart from the proximity of other goblins. On the plus side they are cheap: you get a lot of goblin per doubloon. And that’s as far as a common theme goes for this crew, if you ignore the leitmotiv of a penchant for loud and devastating weaponry. Bombs, rolling powder kegs, pistol harpoons, and of course the rightly-feared paddle of Doom: goblins will fight with anything fun (and noisy).

Goblins have a tendency towards individualist eccentricity. Piggy-backers, armour made from giant crabs and old stoves, be-turbaned gunslingers but also healers and poisoners can be found in their ranks. And if they really need some Oomph, they can field one of their three orcs.

This diversity means that no goblin looks like the next one, a crew of goblins is usually a riot of colour and movement. One copied the assassin look from the Brotherhood, one is being pushed around in a half-boat-with-cannon wheelchair, yet another is clad in a shark-proof diving suit. Speaking of which, is that one wearing a shark on their back?

Most goblins wear whatever they can find. Some are still wearing their uniforms from their time as slaves, others, fresh from the jungles of their homeland, barely a loincloth if you’re lucky. The state of their equipment is pretty much down to individual preference, ranging from spotlessly clean and shiny to artful ensembles of rust and other stains on a metal core.

You don’t care about binaries, love blowing stuff up and have always had a thing for green? Then indulge yourself here.