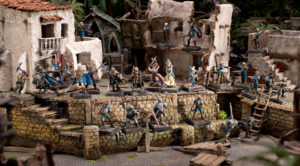 Moreover, the Imperial Armada has a well-established chain of command which allows certain characters to give orders even when the commander is still on the field.

The Imperial Armada used to control the entire city of Longfall, back when it was called Puerto Alto. In fact, they claim to have owned the entire island on account of having been the first to land on it while in possession of a flag. Things have been a bit of a mixed bag for them since then.

First they got kicked out by the pirates, whereupon they retreated to the jungle to conserve their strength and rethink their options. Then they tried to reconquer the city of Longfall but only got sort of halfway, ending up on one side of a city divided by a wall. When that finally came down, an even worse threat surfaced which forced everybody to co-operate. But in spite of all this, they have never given up their claim on the whole city.

The dominant themes in an Armada crew are long-range firepower and iron discipline. They can still field powerful close-combat troops with which to clear away whatever the arquebus firing line has left standing. All of this is co-ordinated using orders issued by the elements of a well-organised chain of command.

The Armada is best at engaging its enemies at range, their arquebuses are rightly feared all over the island. Their high morale and their chain of command make the Armada the queen of the defensive.

A crew of the Imperial Armada remains steadfast under the watchful eye of its officer cadre. The firepower is so high that it even has specialist supporting troops to keep up the supply of loaded weapons. The Armada is this not overly fond of terrain, unless it doesn’t get in the line of fire and ideally even slows down the enemy.

Occasionally, combat troops find themselves being visited on the battlefield by bored nobility who appear with their own entourage. Recently, even some representatives of the Academy of Fine Arts have been known to show up, although this is hardly surprising because the fine arts in question are those of hunting down mystics and putting an end to all this woo nonsense.

The Armada has a range of options from which to choose, but the classic setup is the firing line supported by a loader and commanded by an officer.

The Imperial Armada is a regular army and thus of course clad in uniform – from the lowest private to the highest-ranking officer. Imperial doctrine puts less weight on any camouflaging properties in this respect, being more concerned with rank and troop type being readily discernible. This is because the Armada is still mostly meant to fight the large battles of the Old World while this sort of colonial skirmish is considered beneath the notice of imperial planning officials.

Occasionally, however, nobles “visiting our brave boys and girls” bring with them a touch of courtly fashion, thus breaking up the uniform look of the imperial ranks.

You like order, discipline, and a jolly good rollcall? Then step right up to join the Armada here.