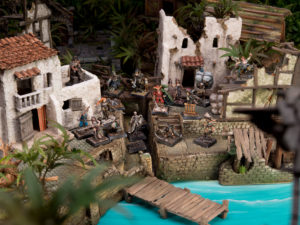 It all started small. Longfall had always had its share of soldiers of fortune, swords for hire, people of highly negotiable loyalty – mercenaries. They were drawn to the island and its city by the rumours of easy fortunes to be made for people who did not mind, in fact positively relished hitting other people over the head for doubloons. And so there was a thriving market of self-employed individuals hiring themselves out to the highest bidder. Or, quite often, the first bidder.

But then History happened (yep, the one with a capital “H”), the Empire retreated to the jungle and a group of dynamic, risk-loving entrepreneurs noticed that while the Armada had taken all their gold with them, there was nothing in the jungle on which to spend it. So they set up the East Leoneran Trading Company which quickly became a vast enterprise, the primary employer of all mercenaries on the island and a major international player. Always on the lookout for profitable new fields of business, the ELTC is now intending to become the market leader in “relocation of cultural goods with above average content of precious metals).

Mercenaries primarily fight for other crews to offset those crews’ weaknesses or augment their strengths. In the game, all crews can hire mercenaries, although not every mercenary will fight for just any crew. Mercenaries take up the role and the position of a specialist. There are mercenaries for every sort of combat, up to and including animal handlers and mystics.

However, mercenaries can also fight as their own crew under the banner of the ELTC. Such a crew can be tailored to melee or ranged combat, can employ loas, and can also be padded out with deckhands from other crews. Because mercenaries tend to charge high fees for their services, ELTC crews are usually outnumbered.

The variety of their tasks in combat is mirrored by the variety of their attire. Mercenaries are a colourful lot. While some adapt to the general look of their favourite employers, others are clad in Caribbean pirate attire. And of course there are those who aren’t followers of any fashion and set their very own trends.

Does a life as a self-employed entrepreneur with entirely negotiable ethics appeal to you? The join the ELTC!