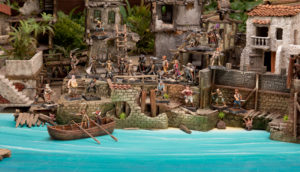 The pirates are a colourful bunch of windswept, combat-hardened, weather-beaten, rum-drinking, creatively cursing people from all corners of the worldsea, from all walks of life, from all layers of society, who have turned their backs on established society to carve out their own niche with powder and sword. Arrr! Some of them are driven by the desire for freedom, others by a lust for gold, and then there are those who are not quite so sure anymore, after all the rum and the fighting and the knocks to the head. But one thing is for certain: nobody tells them how to do what they want to do.

The first pirates were probably on Leonera before the Empire showed up; they just never made much of an appearance. Which is a very sound tactical option for the owner of a leaky little tub when the opposite side arrives in a flotilla of frigates. But those leaky little tubs became bigger, stronger, less leaky, and more numerous, until one fine day there were enough of them to kick the Empire out of the city. Off and on the pirates attempt to form some sort of organised government, but their love of gold, rum, and fighting usually puts paid to that after some time.

Due to the colourful nature of their crew, you can expect the pirates to have a bit of everything and to combine it with unbridled enthusiasm if not necessarily a sense of taste. This is not only true for their clothing, which usually consists of everything they were able to grab from the dark holds of merchantmen in the last three raids or so. The more colourful the better. And anybody who wants to scoff about the fact that that old, favourite, bullet-punctured hat does not match the rest of the ensemble is welcome to tell that to the pirate’s face – provided they were never really bothered about their nose being uncrushed.

The pirates’ arsenal is a similarly varied mixture. You can see them fighting with everything from throwing knives to hand-held mortars: as long it meets at least one of the criteria of making noise, doing damage, and looking cool, the pirates will use it. And whatever they use they tend to use very well. The pirates therefore do not really have any obvious strengths or weaknesses, one of them is bound to have the right tool for the job on them, even if it happens to be just a naked fist.

On the battlefield, the pirates are a great all-purpose crew. They can really dish it out, at range as well as close up, and can soak up some damage in return without falling to the ground crying like some overpaid ballplayer. A good captain should bear in mind, though, that the pirates need to use their flexibility to counter the strengths of more specialised crews.

Are you a pirate at heart? Can you say “Arrr!”? Then go here to find more of your kind.