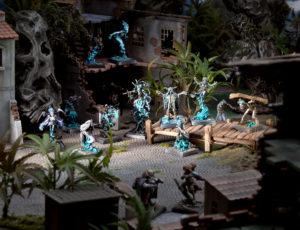 The Brotherhood always suspected that there was something really evil hiding in the dark nooks of the world. And then a door was knocked open, whether by accident or with some ulterior motives behind it, to prove them right. Out in the jungle, in the ruins of an ancient temple, the pathetic remnants of an order so secret that everybody else had forgotten about them, have finally failed to keep the unmentionable sealed in its prison.

The door, slightly ajar for eons, suddenly bursts, allowing the Shadows to escape. Into a world of light, gold, rum, and strange beings. The Shadows model themselves on those whom they first encounter, to blend in with the world which they want to reconquer. And so some people, be they pirates or the owners of bijou Debonnese cafés, are suddenly facing their own shadowy selves.

Whatever they were when they were locked away all those eons ago, the Shadows have mutated into something uniquely strange. And the fleshlings who would oppose them are far too busy with each other.

But the Shadows are not omnipotent. They have to use the night, the darkness. That seems to be enough, though. Longfall is terrified, its inhabitants only dare walk the streets in groups with lanterns at night. Everybody is feverishly looking for an antidote, effective protection, or some sort of saviour. Or, failing that, a scapegoat.

In battle, the Shadows have their own rules, those of the fleshlings do not apply to them. While they still have to get used to having bodies again and are accordingly flimsy, a vanquished shadow turns into a Wisp, only to reassemble into a new creature when your back is turned.

Not all Shadows used humans when deciding on their new form or stick very closely to that template. They have a tendency to grow more limbs than is traditional, and animals and even inanimate objects can serve as models for them. Whatever it takes to reconquer the world. Well, Longfall for starters.

As if that weren’t enough, the Shadows can use the mysterious Shadow force to boost their actions or perform more advanced ones. And they can field portals to the Shadowworld which allow them to move from one corner of the battlefield to the next in a single bound.

Are you unafraid of the dark? Are you the dark? The Dark, even? Then go here to terrorise the fleshlings.