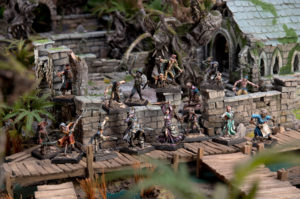 When the first pirate alliance broke apart, captain Asqueroso turned to the mystical Cult. The real power behind him is the mystic Sybiline who is leading her followers to an as yet undisclosed goal. Ever since then, cultists have been popping up from the dark corners of Longfall, bringing soulless sansâmes and culty pirates with them. Obviously making a grab for power over all Longfall. Because what else would they want?

When the pirates had finally kicked out the Empire, those people crawled out into the light to fill the resulting vacuum of power. Nobody had bargained with them, but the Cult has risen again in Longfall and has a steady influx of new members who are turning towards the spiritual in their search for constancy in these chaotic and troubled times.

A secret talent allows the Cult’s mystics to invoke loas, ghosts from a parallel world, and drive them into the bodies of the living to cause various effects when there. These effects can be subtle or dramatic, benevolent or really rather nasty. Some loas are stubborn and hard (read: expensive) to call, whereas others are easy-going and truculent. Invoking loas is a tad more complicated than bashing somebody over the head with a blunt instrument and so has its own rules.

A similar talent to that which allows some individuals to call loas, allows others to pull a person’s soul from their body and prevent it from returning by sewing shut important openings with special thread. They can thus control the now effectively soulless individual. Most of the Cult’s characters are usually intent on protecting and/or supporting their mystics, because neither of them can win a fight without the other.

In battle, the Cult has to deploy a lot of, fortunately cheap, deckhands, which usually means that they have at least numerical superiority. Each kind of deckhand has a specific talent: cultists help their mystics invoke loas by forming a mystical choir. Sansâmes (the soulless) act en masse and can soak up a lot of damage but require other characters, so-called souldrivers, to make them do anything useful.

The heart of any Cult crew are its mystics, though. They can call their loas into their enemies without even needing line of sight. Loas, which can be called into friends and enemies alike, should be chosen depending on the scenario and the opponent. Each mystic has access to certain types or domains of loas. The number and variety of loas and the nature of their effects make the Cult a crew for more advanced players.

Farmers armed with pitchforks and clubs, pirates with a voodoo look, and not least the sansâmes give the Cult tactical variety on the battlefield. While necklaces made from bones, facepaint and voodoo dolls give the crew a mystical and somewhat darkish look. The more “Oogle-dee-boogle-dee” flair, the better.

So while the specialists and those with actual mystical talent tend to want to highlight their uniqueness through their attire, wanting to appear as mystical as possible, the rather more rustic cultists tend to favour hard-wearing homespun. Whereas sansâmes wear whatever hasn’t rotted off them yet.

Ghosts, zomb… um sansâmes, and all that other mystical woo is totally your cup of tea? Then go and join the Cult here.