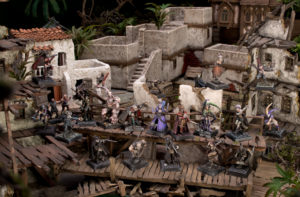 As an added bonus, a Brotherhood crew can always place an additional piece of terrain on the battlefield before the game begins.

The increasingly misnamed Brotherhood, whose ranks contain at least as many sisters, has a noble goal: to reinstate the rightful bloodline to the throne. But not by such embarrassingly unsubtle means as a coup or some such. No, darkness, poisoned daggers, masks, and an almost surgical intervention in the existing power dynamic are the hallmarks of their modus operandi. After all, if you eliminate all potential candidates of the wrong blood, only the true-blooded ones will be left over and so will automatically ascend to the throne. It is the Brotherhood’s declared aim to implement that concept of sublime elegance.

But even the most lofty aims can be diluted over the years. The definition of what exactly the true blood is has become a tad muddied over time. Moreover, the brothers and sisters have become slightly less choosy about their methods. When the first assassin wielding a double-handed war hammer appeared on the scene, the days of subtleness seemed numbered. And yet, the signs of tradition remain in many aspects of their work: poison is popular and black powder weapons are taboo. A classy assassin will at most use a crossbow.

Over the years, the assassins on Leonera have had their ups and downs. At one point they had almost been completely driven out of Longfall, having to take refuge in dark holes and the depths of the jungle. But with the construction of the Wall and the deadlock between pirates and Armada, they have managed to regain footholds in the city. Until a new threat toppled them from their place as the most dangerous thing to lurk in dark corners.

In terms of clothing, the assassins prefer black or dark grey – a timeless classic in their opinion. However, there are also members of the Brotherhood who hide in plain sight during the day and who are thus clad in e.g. the bright outfits of harlequins.

Almost every assassin has to learn to use shadows and darkness to their advantage. Some of them have become so skilled, that they can flit from shadow to shadow without crossing the lit areas in between. It is rumoured that this is less skill than ancient magic, although spreading that rumour tends to drastically decrease your life expectancy.

On the battlefield, the Brotherhood is characterised by its speed and its ability to strike suddenly from unexpected places. They have to make full use of this, because they cannot stand for long against the Armada’s hail of lead or the pirates’ flurry of blows. Sneak up from behind, strike nastily before fateing off sharpish – those are the cornerstones of success for the assassins.

Are you up for some cloak and dagger action? Get yourself some sneaky backstabbers here.